When I was a kid, fruits and vegetables (except for the canned or frozen variety) were actually seasonal: strawberries in June, raspberries and tomatoes in July, corn and peaches in August, apples in September, squash in October, grapefruit at Christmas-time and in spring, ahhh, rhubarb!  I grew up next to a farmer’s field and, as soon as the rhubarb was up, us kids would scarper off in the morning with the sugar bowl to the ol’ rhubarb patch where we would lie in the sun eating raw rhubarb dredged in white sugar.  Later in the afternoon, mom would send one of us back to the field to retrieve the sugar bowl we had forgotten there.

Nowadays it seems that one can find “fresh” tomatoes or strawberries year round, even though they’re pulpy and underripe.  But rhubarb, well it’s only available fresh and only for a couple of weeks at most in the spring.  I buy a couple of cases, at least, then wash, drain and chop the rhubarb into 2 lb portions which I freeze for use throughout the year.  Yes, rhubarb makes great pie and jam and crisps and coffeecakes but, in my view, rhubarb is best just stewed and eaten on its own or spooned over ice cream or plain yogurt. 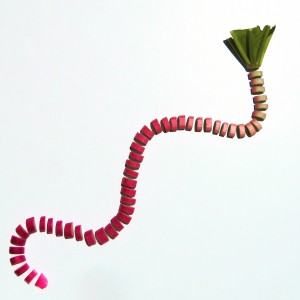 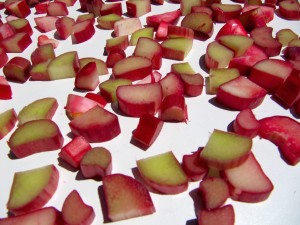 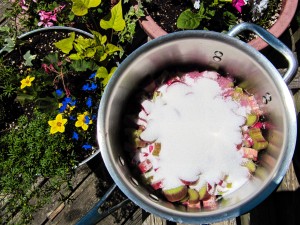 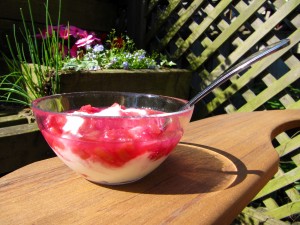 Teaching Kids to Cook and Eat Their Vegetables – Part One