Why do people seem to use slow cookers only in winter?  Yes, a hearty stew is comforting and delicious on a snowy day.  I’ve set up the slow cooker in the morning and then spent the day skiing with my family; there’s nothing like coming home to dinner that is good to go when you’re too tired to cook and everyone is starving.  But slow cookers are fabulous in the summer too.  On a screechingly hot day, when you don’t want to stand in front of an oven, stovetop or BBQ, a slow cooker is the way to go.  And, unlike an oven, it doesn’t heat up the kitchen.  Pulled pork is perfect for a steamy summer evening on the back patio after a day of swimming or walking the beach.  This recipe feeds a crowd, or makes enough for leftovers for another day.  I used sliced cornbread (recipe here) as a base as it has more stamina and flavour than doughy buns.  Top with guacamole and coleslaw and you’re in business! 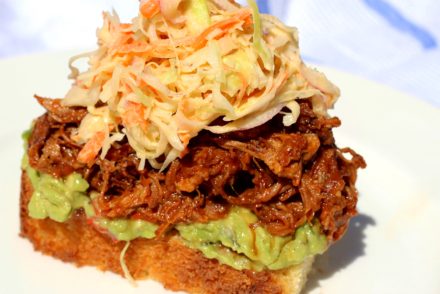 Save Print
Ingredients
Instructions
3.5.3208
Listen to this playlist from Tim Moxam and read Part Two of my rant Banning Tipping is the New Organic…
Share3
Tweet
Pin1
dinnereasyfeed a crowdleftoversparty foodporkslow cookersummer